Our company Mer Shipping Transport Industry & Trade Ltd. was established in 2001. Presently as Mer Group Companies, our company consist of Mer Shipping Agency, Mer Global Logistics and Sm Land Transport companies.
From beginning of 2011, Mer Denizcilik has become representative in Turkey for Rostov Universal Port. This is the biggest port of the region where it was located and the only terminal in Rostov on Don that handles containers. The Azov-Don Logistic Company (Azov-Don Shipping Holding Company http://adpcorp.ru/eng/ ) which we represent in Turkey, is the owner of three ports in South Russia and also the shipowner of more than 170 vessels. The group companies has capacity of total cargo handling of 10 million tons in 2012. The holding consısts of 43 companies and has a quite large and different services such as terminal operator, warehousing, chartering, land transportation, customs brokerage etc. The company is member of private sector. Total area of Rostov Universal Port exceeds 4,500,000 m2 and the investment budget of project jointly with Federal Government investments is about one billion usd.

Our Principal, Azov Don Logistics Company, in order to be a participant of Azov and Black Sea container market and to improve the container handling capacity of Rostov Universal port has decided to establish a container line between Ambarli/Istanbul/Turkey and Rostov/Russia as of April 2012. More than one year, Rostov line serves with every ten days port call frequency. In addition, It is also considerably convenient for railway inland carriage of the project cargoes due to railway connection. Cargoes can be delivered to almost all countries that are the old members of Ex-Soviet Union. Istanbul-Rostov-Istanbul line is a direct service and transit time is only three-four days.

Compared to Novorossiysk, Rostov port is about 400 km closer to Moscow. From the point of transportation costs and transit time this has got inarguably a great value in the Rostov port. That is ideal point, in order to transfer goods to inland of Russia, in addition to the port services and also customs and storage services are available. The large storage area gives opportunity for handling of any kind of cargoes. The port terminal is operating container and bulk cargo with sufficient number of handling equipment besides, the port continues container handling for last ten years.
Our companys primary principle are top quality, customer focused low cost effective, correct and regular information flow due to our experienced personnel who are specialized in their field. Now we are ready to receive your phone calls and e-mails in order to introduce Rostov port and the line which we represent in Turkey, and to carry your valuable cargoes. Yours faithfully, 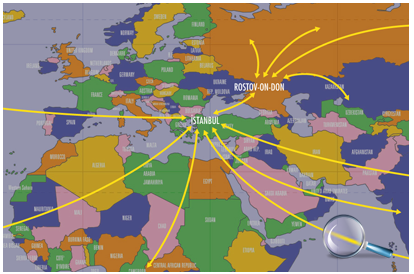